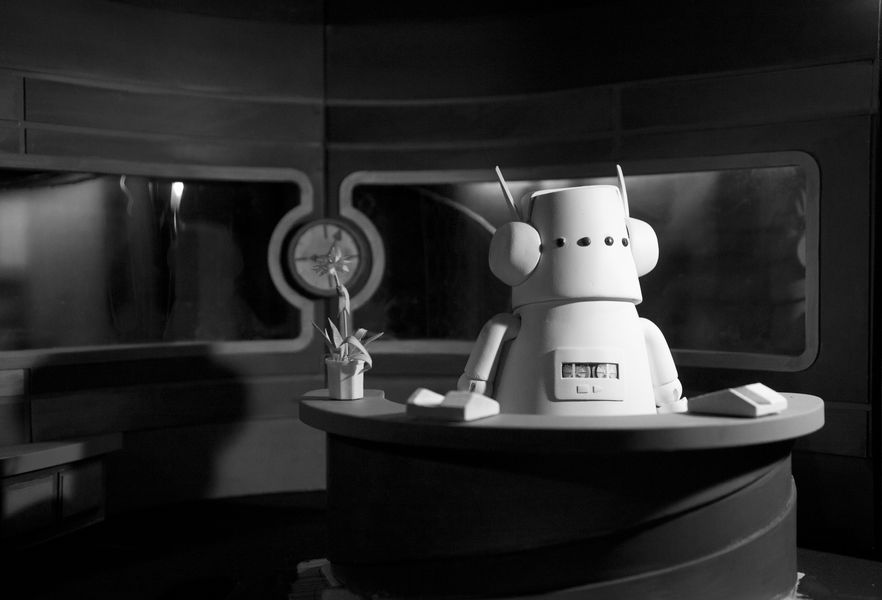 A Graphic Novel Animated In Real Time With A Live Soundtrack

She's a lonely office girl. He's an out-of-work robot struggling to find his voice amidst the noise of the city. Little do they know that destiny has programmed them for the greatest love story of our time.

Equal parts cinema, theatre, musical concert - Watch an amazing team of puppeteers bring the characters of Kid Koala's graphic novel Nufonia Must Fall to life in miniature sets built to recreate each scene from the book. Under the direction of renowned production designer KK Barrett (Her, Where the Wild Things Are, Adaptation, Being John Malkovich), the performance is cinematically lit, filmed, and projected on a large screen. Kid Koala, accompanied by Afiara Quartet, performs his original score on piano and turntable. All of these components come together in real-time thanks to a team of twelve talented performers and technicians.

Bring your loved ones -- or bring a stranger! Enjoy an evening of entertainment perfect for the whole family or even for a first date. Get comfy and enjoy director KK Barrett's LIVE version of Kid Koala's Nufonia Must Fall.

Society for the Performing Arts

Nufonia Must Fall Live @ The Institute for Contemporary Art, Boston

Nufonia Must Fall Live @ Segerstrom Center for the Arts

Kid Koala is a world-renowned scratch DJ, music producer, and award winning graphic novelist. He has released four solo albums on Ninja Tune the most recent being 12 bit Blues. He has released two graphic novels: Nufonia Must Fall and Space Cadet. He has also been involved in collaborations such as Gorillaz, Deltron 3030, and The Slew.

Kid Koala has toured with the likes of Radiohead, the Beastie Boys, Arcade Fire, Money Mark, A Tribe Called Quest, Mike Patton, DJ Shadow, and The Preservation Hall Jazz Band. He has contributed to scores for the films Shaun of the Dead, Scott Pilgrim vs. The World, Looper and The Great Gatsby. He has composed music for The National Film Board of Canada, the Cartoon Network, Sesame Street, and Adult Swim. He has also been commissioned to create music for runway shows for Belgian fashion designer Dries Van Noten. Kid Koala’s unforgettable live shows range from silly touring turntable carnivals like Short Attention Span Theater (featuring turntable bingo) and Vinyl Vaudeville (including puppets and dancers) to quiet-time events like Music To Draw To, his Space Cadet Headphone Experience and most recently, Nufonia Must Fall Live.

He lives in Montreal with his wife and two daughters.

K.K. Barrett is a Production Designer known for his work on the films of  highly individual directors.  While born in Omaha, Nebraska, he began his creative path in Oklahoma as painter, sculptor and musician.  Playing “pleasurable avant noise”music brought him to Los Angeles in late 1976 and quickly he became the drummer and visualist for The Screamers, a synth, piano, vocals and drums experiment known for wildly popular live shows on the both coasts.

This led to his first experiences designing sets for  videos, winning MTV awards for “Tonight Tonight”  with the Smashing Pumpkins and “New Pollution”  with Beck. These adventures  became serious with  Being John Malkovich, Spike Jones’ feature film debut.  He has been the Production Designer on all of Spike’s films, including Where the Wild Things Are and recently was Oscar nominated for his design of HER.  His other design/director collaborations have been equally unique, Lost in Translation and Marie Antoinette with Sofia Coppola, Human Nature with Michel  Gondry, and I Heart Huckabees with David O. Russell.

In 2011 Barrett teamed with Karen O. to create Stop The Virgens a theater piece, or psycho opera as they prefer it known, which combined dance, live music, projection, sets and sound design.  It played 2 sold out runs at ST Ann’s  warehouse in New York City and in 2012 at the Sydney Opera house.  This led to  hooking up with like minded musician /visualist Kid Koala and  interpreting Nufonia Koala’s graphic novel,  as a live theater experience.

Ryhna Thompson has been a Founder, President, Producer and Artist Manager in the cultural and creative industries for the last 2 decades. Under the banner of her company Envision Management & Production, she has worked with internationally recognized, boundary breaking artists rooted in music, such as Kid Koala, Bell Orchestre and Amon Tobin amongst many others. Her artists have opened tours for Radiohead, Arcade Fire, Jack Johnson and performed in venues such as Madison Square Gardens and Hollywood Bowl. She has assembled and managed tours on 5 continents and overseen dozens of record releases. Always thinking outside the box, Ryhna has frequently worked with artists to conceive, produce and manage projects in the realm where music intersects with film, animation, theatre, literature and interactivity. Projects have been brought to life with Mass MoCA, Luminato Festival and the National Film Board of Canada to name a few great organizations. Always keen to contribute to her communities, Ryhna served for many years as President of the Music Managers Forum Canada. Nufonia Must Fall Live is her latest work as a multi-disciplinary Producer, working alongside longtime collaborator, Kid Koala.

The Afiara Quartet is a dynamic, young string quartet, described as "a revelation" (La Presse) with performances balancing "intensity and commitment" and "frequent moments of tenderness" (Montreal Gazette). The Quartet is the Glenn Gould School Fellowship Quartet at Toronto's Royal Conservatory of Music and is winner of the Young Canadian Musicians Award, Concert Artist Guild International Competition in New York, and prizes at the Munich ARD and Banff International String Quartet Competitions, including the latter's Szekely Prize for the best interpretation of Beethoven.

The Afiara is an ensemble for the 21st-century and seeks to be a string quartet defined by its relentless pursuit of beauty, meaning, and growth as musicians and ambassadors for the genre. The Afiara has performed throughout the Americas, Europe, and Asia, at such venues as Carnegie Hall’s Zankel and Weill Halls, the Kennedy Center, Alice Tully Hall at Lincoln Center, Library of Congress in DC, Sao Paulo’s Museum of Modern Art, Pro Musica of San Miguel de Allende, London's Wigmore Hall, Austria's Esterhazy Palace, Munich’s Prinz Regenten Theatre, Amsterdam’s Muziekgebouw, and the Royal Library in Copenhagen.

AJ Korkidakis is a Montreal based digital media artist who finds himself constantly jumping between filmmaking, photography, animation, design and whatever other medium a project might call for. This multi-tasking style keeps his work fresh and gives him access to a wide range of techniques to create rich visual worlds with–in other words, he prefers to dream up images first, and then figure out how to create them after. His films have played festivals internationally, including TIFF and Just for Laughs, have won him two awards at the Youngcuts Film festival, and have also been broadcast across North America. He is a frequent collaborator with many noted Montreal musicians on various video and animation projects. His design work has ranged from traditional poster design to creating organizations' entire visual identities, and has led to him illustrating the december 2012 cover of New Internationalist magazine. More recently, he has begun to create work with a focus on interaction, whether it be through physical installations, or digital applications. He loves to use his work to explore the blurring lines between traditional and new media, and he is most in his element when working in multi-disciplinary environments that challenge him to learn new skills in order to complete a project. As such, Nufonia Must Fall is a perfect home for him.

A performer, designer, and director, Clea Minaker explores contemporary puppetry art. Clea has created with musicians Feist (The Reminder Tour 2007-2008), So-called, Kid Koala, and Esmerine. In 2013, she collaborated with Atom Egoyan at the Canadian Opera Company, and presented a solo, The Book of Thel, at Festival Artdanthé in Montreal. In 2009, Clea was awarded, the Siminovitch Protégé Prize for Theatre Design by Ronnie Burkett.  Clea trained at the International Institute of Puppetry Arts (2002 -2005) in Charleville-Mezieres, France.

Félix Boisvert studied composition at the Conservatoire de musique de Montréal, where he received his master’s degree in 2005. He has worked as a multidisciplinary artist (puppet theatre, music, technological arts, and dance) for the following productions: Concerto au sol (2014), Lune et l’autre (2009), Pas à pas (2006), Manu danse (2005). He distinguishes himself alternately as a puppeteer, teacher, musician and sound artist. His process stems from a desire to express music in artistic forms that defy their nature as sound. For the past few years, he has found fertile grounds for this exploration within puppet theatre.

He also is a music teacher, mainly of the Fonofone, an instrument he helped to develop, and with which he tours schools across the province of Quebec. He has taught over 1000 workshops to enthusiasts of all ages.

He co-directs a newly-built creation and experimentation space for the in-depth study of multidisciplinary practices.

Since 2001, Karina Bleau has been developing an art practice that melds sculpture, film and the puppeteering arts, resulting in visual theatre through which matter, light and the body in motion are explored.

This approach enables her to examine our incoherent relationship with the world through the underlying themes of life and death and of transmittance. She approaches her art as a means to shed light on the possible relationships between humans and their inhabited spaces.

In conjunction with her practice, she co-directs an interdisciplinary research space which promotes the in-depth study of marginal artistic practices, and is dedicated to teaching her art to young people. Her work has been shown at home and abroad: Petit nid (2009), Atlantis (2010), Haïku du dernier souffle (2011), Jean-Claude est un homme-Maison (2012), Haïku en trois temps (2012), Grain dans’ tête (2014). She has been working on her most recent show, Sacré sucre, for the past two years, and will be premiering it in 2016 at the Théâtre les Écuries in Montréal.

Her path has led her to be recognized for her innovations in theatre, to a diploma in contemporary puppeteering and a master’s degree in theatre at the Université du Québec à Montréal, and to receive the international Arlyne award for puppet design in 2004.

Patrick Martel has been working as a puppeteer as well as puppet and set designer for over 20 years now. His work was